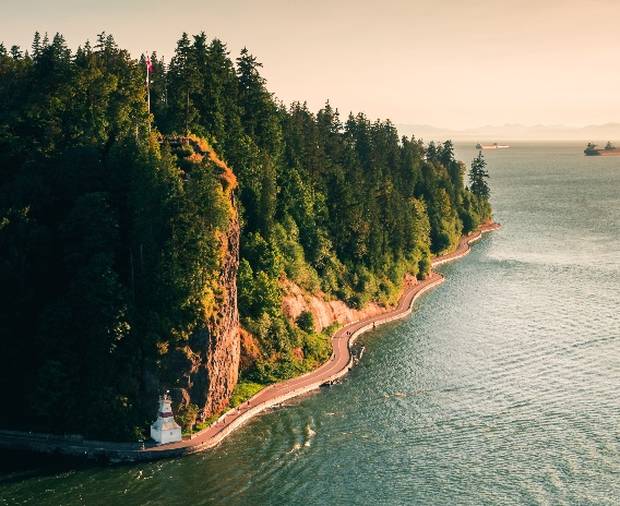 Vancouver delights year-round for its outdoor adventures, smiling locals, and truly world-class location. But that’s not all this Canadian city has going for it. This is a city we never tire of – here are just ten of the reasons we love Vancouver.

Vancouver is regularly included in different reports ranking major cities for quality of life. In recent years, it has featured in the Economist Intelligence Unit, coming out at sixth place in a study that balances crime, healthcare, political stability, living standards, and more. Well done, we say!

Part of that liveability just has to be down to the wonderfully friendly Vancouverites. This is a big city with a community feeling, where there’s a generally positive vibe floating through the air. In Vancouver the locals will chat to you, even public transport drivers, so you can feel comfortable chatting right back, and practicing your English while you’re at it!

These 1,000 acres of green space are a must-see in Vancouver for good reason. A public park that looks like it comes from an entirely other world, this absolute gift to the city features a mix of manicured gardens, and semi-wild wilderness. Discover the 10 kilometer seawall by bike and take in the skyline from across the water. (Oh, and watch out for the raccoons!)

Speaking of water, Vancouver has a lot of it – whether frozen as snow atop the nearby mountains or filling the beautiful English Bay where the city meets the Pacific Ocean. This gorgeous bay is a summer favorite, sporting a number of downtown beaches and coves to chill out at or watch the sunset.

Just across the water from the main city, 460 kilometer long Vancouver Island is bursting with wilderness and wildlife. Think orcas, humpback whales, cougars, sea and river otters, grey wolves, sea lions, elk, deer, even black bears. Are you an animal-lover? Treat yourself to a wildlife-watching tour, or plan your visit to coincide with one of the many natural migration events that take place throughout the year.

But wildlife isn’t all there is to see. Vancouver is surrounded by mountains, lakes, hiking and mountain biking trails. Take to the water to paddle board, scuba dive, and swim. Winter brings skiing and snowboarding season (Whistler is just a two-hour drive away) and all is this served up with great weather! Summers are hot, fall brings fiery foliage, spring enchants with its flowers, and winter, while rainy, isn’t as intensely cold as in other parts of the country.

While walking, take in the city’s memorable, tongue-in-cheek, and thought-provoking takes on public art. While you’re there, don’t forget to see Digital Orca, a pixelated sculpture of a killer whale mid-leap, and Girl in a Wetsuit, a nod to Denmark’s The Little Mermaid. There’s also an 18 foot sparrow at the Olympic Village plaza, the A-maze-ing Laughter group of bronze laughing sculptures, and the neon light installation literally asking “Should I be worried” emblazoned across a structure that frames condos in the background.

The Vancouver Aquarium is one of the world’s top ten aquariums, where more than 30 exhibitions take visitors on a journey from the Arctic to the Tropics. Animal lovers can visit and feel confident about supporting a positive cause as they gape at jellyfish, otters, dolphins, seals, sharks, and sea turtles: The aquarium has a focus on sustainability and plastic waste, working with a program to certify the sustainability of the seafood in local restaurants.

It’s safe to say that Vancouver does food well – they can source fresh seafood 10 miles from the center alongside produce from nearby valleys. In short, this is a city that can do farm-to-table and do it well – plus it’s easy to find vegan options. What’s to eat? Vancouver’s Chinatown is really something to write home about, as is its enormous range of sushi restaurants. Also on the menu is Jamaican, Ethiopian, Lebanese, Salvadoran, Tunisian, French, Spanish, Caribbean, vegan, gluten and dairy free.

Tags: Travel tips, English, Canada, Vancouver
Get the latest on travel, languages and culture in the GO newsletterSign me up