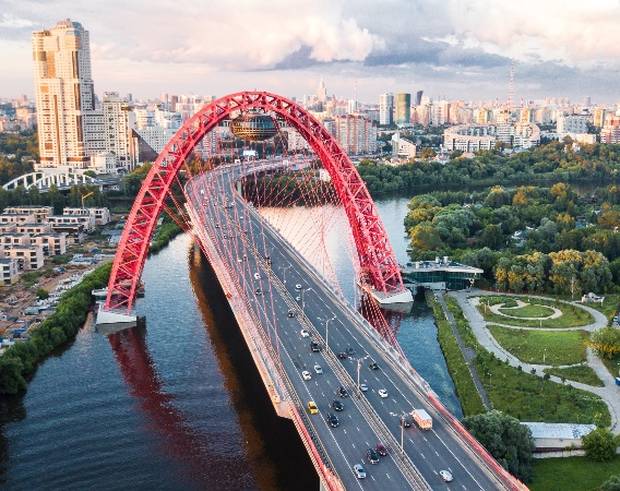 Varied and wacky, vast and extravagant, Russia is the largest country in the world. Comprised of over 114 million people, spanning 1156 years of history and covering 11 time zones, Russia is home to a rich cultural diversity and vast natural beauty unlike anywhere else.

From the huskies running up ice-cold Siberian mountains to the natural light displays of the Aurora Borealis; from the dome-shaped raspberry-ripple rooftops of St. Basil’s Cathedral to the world-famous artworks in the Tretyakov Gallery, there’s a never-ending list of reasons to visit this spectacular country (don’t worry, I’ve capped this list at 15 reasons). Let’s dive into this like Russians dive into icy plunge pools in Banya spas.

1. Comprehend the size and scale of what’s on offer

You know the facts already: 1156 years of history, 114 million people, 11 time zones. It’s the sheer scale of this country that makes it the ideal destination for every type of tourist.

Adventurous types head to the mountains and lakes for hiking, skiing and watersports, while those looking for culture and experiences at ground level explore the country’s 1,110 cities and towns. Tourists are left with the feeling that there’s always more to explore – and it’s this fact that underpins every other reason in this list.

2. Unravel the complexity of the culture

Russia is steeped in stories to uncover. With such a large country comes tremendous history, contrasting cultures and a lengthy political past. From the intricacies of the Byzantine Empire and the development of Soviet Union to the cultures of over 100 identified minority ethnic groups in Russia, some of whom are indigenous people with their own dress code, religious traditions and even their own language.

Russia’s cities are blessed with opulent architecture and unique design at every turn. In Moscow, the oldest city in Russia, even the city’s metro stations are a testament to the grandeur found in the country’s palaces, after Stalin requested that the train stations should be designed as if they were the ‘People’s Palaces’. Be sure to ride the Metro to Red Square, where you will find the extravagant architecture of the former Russian Empire.

Meanwhile, St. Petersburg, the former capital, is considered Russia’s cultural epicenter. There you’ll find a dizzying mix of styles: the Yelagin Palace and Mikhailovsky Palace call back the age of Antiquity with Neoclassical columns and structures; the St. Petersburg House of Soviets, of course, offers passersby an imposing image of Soviet Architecture; and the Winter Palace, once home to one of the Tsars, is famous for its lavish Baroque-style.

This part of Moscow deserves a section all to itself (and not just because I said so). All of the country’s major highways and Moscow’s streets are traced back to the cobblestones at this breathtaking sight. After you’ve taken in the famous onion domes of St Basil’s Cathedral and considered whether you have accidentally stepped onto a film set, it’s time to visit the attractions on the square.

From this one location, you can visit Lenin’s Museum and see the world’s most famous mummy, shop at the GUM department store and look up in awe at its skylight roof, and take a tour around the fortified complex of The Kremlin, which encompasses five palaces, four cathedrals and symbolic red-brick Kremlin Towers. In fact, you might need to section off a day or two to complete your Red Square itinerary.

Tired from exploring all those ornate palaces? Go beyond the classic tourist spots and jump aboard the Trans-Siberian Express. This scenic train ride from Moscow to Vladivostok is 5,752 miles long, journeys across the plains of Siberia and stops at some of Russia’s most spellbinding sites. The route takes 6 nights to complete from start to finish.

Whiz past the frozen Lake Baikal in winter and or ride the train in summer and see sunlight twinkle across its vast waters. There’s food on board and free wifi, though you’ll likely be too distracted by those window-seat sights to be streaming a Netflix film. You’ll have to finish that lengthy ‘War and Peace’ book some other time, too (though we will talk more about Russia’s impressive literary influence later).

Staring at all those dramatic landscapes through the train window is therapeutic, but what about experiencing them yourself? You won’t have missed Lake Baikal on your Trans-Siberian railway journey (it’s the largest lake in the world) and the surrounding nature provides the perfect stop to stretch your legs, whether you spend a few hours or a couple of days here.

If you’re looking to climb higher, head to Mount Elbrus, which is one of the most popular hiking destinations in Russia due to its impressive views on both its trails for absolute beginners and professional thrill-seekers.

7. Stay for the winter, watch the sky light up

This one is a bucket-list ticker. Head out into nature and watch the sky explode in the colors of the Aurora Borealis. This dazzling natural light display is a phenomenon caused by solar wind and is nature’s beautiful reward for endless dark nights and biting cold weather in the North above the Arctic Circle. The Kola Peninsula is considered one of the most accessible spots to enjoy the display.

All art enthusiasts will find there’s never enough time in Russia. Visit The State Tretyakov Art Gallery in Moscow to view over 180,000 entirely Russian art pieces ranging from the 11th Century to the 20th Century. In St Petersburg, you can devour over 3 million artworks and artifacts in The State Hermitage Museum and ensure you see the most famous painting of all: Rembrandt’s The Return of the Prodigal Son.

9. Discover the medieval towns in the Golden Ring

The Golden Ring is a popular tourist route through Russia, which threads its way through key Medieval towns and cities which have been left mainly undisturbed by modernity and industrialization. Captured in this ancient sphere of Russia, you will find the spiritual history of the Orthodox Church, taste a traditional food culture and try your hand at ancient arts and crafts.

There are around 100,000 rivers in Russia, winding their way in and out of cities large and small. Cruising these rivers with a tour guide is one of the best ways to discover the country, where, as the sights glide by, you can sit back and listen to the ancient fables and historic stories that connect to the surroundings.

11. Cleanse in a Russian Banya (Sauna)

After all that exploring, wind down the way the locals do and bathe in a Russian spa. As one of the most popular recreational activities in Russia, you will find a Banya spa in any major city and be able to treat yourself to a traditional steam bath or an invigorating Paranie treatment, which involving twigs and eucalyptus brushed over your body to boost circulation and release tension.

You might not think of Russia as your first choice for a sunny getaway, but the Sochi resort is a popular summer beach resort for many Russians. Situated along the Black Sea, this city is subtropical and palm trees line its streets. Here you can discover Russian museums and architecture surrounded by green forests and warm sunlight.

Ballet in Russia is a cause for national pride. Heavily intertwined with the country’s history, as ballet was a prime form of entertainment for Russian nobles for centuries.

Russia is now the source of the world’s most skilled ballet dancers and is said to have its own unique style. Nowadays, ballet isn’t just reserved for royalty. Book a seat in the Bolshoi Theater and experience an evening like no other.

Known all over the for Anton Chekhov’s famous realist plays, Russian culture is just as serious about theater as it is about ballet. Moscow is considered one of the world’s top theatrical capitals and, despite its relatively short history in the context of theatre history, the city now has over 70 theatres.

15. Peruse the works of literary greats

Any book lover will surely relish a trip to the home of some of the most famous literary greats: Leo Tolstoy’s War and Peace, Nikolay Gogol’s Dead Souls, Fyodor Dostoyevsky’s Crime and Punishment  – to name but a few.

Take a literary tour through Russia, visiting the museum of each of these authors. Some walking tours around St Petersburg will even stop at sights in Crime and Punishment. If you’re in need of a break, bring along a poetry book of Alexander Pushkin and read ‘The Land of Moscow’ in the place it was inspired by.

Tags: Culture, Traveling, Visitors Guide
Learn Russian in MoscowLet's go!
Get the latest on travel, languages and culture in the GO newsletterSign me up