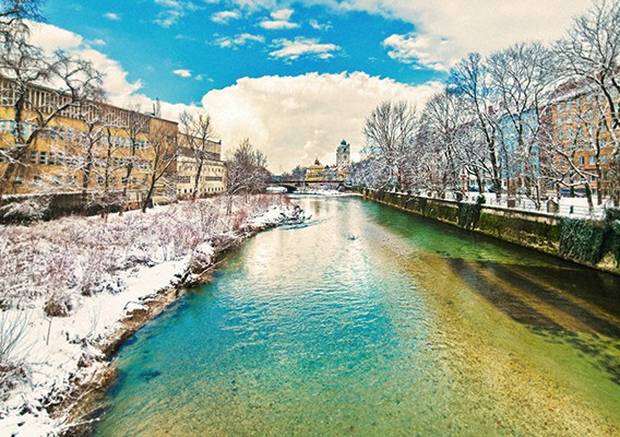 Munich, Germany’s third biggest city and capital of Bavaria, is an absolute favorite of mine and one of Europe’s coolest cities to visit. Don’t believe me? Well, I stayed for eight years and still get a little teary eyed when talking about “die Weltstadt mit Herz” (a cosmopolitan city with a heart.) And why does it rock? It’s modern and traditional at the same time, has lots of cozy beer gardens where you can hang out with friends, and nice sunbeds along the river Isar where I spent countless summer evening barbecuing with friends and just hanging out. Pure summer bliss…

Spend days or weeks there if you can, but if you only have 24h to spare, here are some  tips on how to spend your day:

Start the day with an original “Weißwurst Frühstück“ at Hirschgarten, one of Munich’s nicest parks and beer gardens. A sausage for breakfast not your thing? Then hit up one of the trendy cafés in Munich’s quirkiest and coolest neighborhoods: Haidhausen, Neuhausen or Schwabing, and sit down to sip your cappuccino.

Time for some sightseeing. Start at the Karlsplatz square (also known as Stachus) and walk down the high street to Marienplatz, another one of the city’s famous squares. Bag a few souvenirs along the way, and you’ll soon be at the impressive “Frauenkirche”, a cathedral and one of the city’s most famous landmarks. If you have a minute, go inside and have a look at the “devil’s footprint” in the entrance hall.

When you arrive at Marienplatz at 11am sharp you’ll catch the sweet and traditional “Glockenspiel” playing at the new town hall. Hang out here for a while longer and admire the Mariensäule, a statue of the holy Maria and symbol of hope and faith in the city since the 30 Years War in the 17th century. Fun fact: Marienplatz is also the place where Bayern Munich, currently the world’s best football team, celebrates its titles.

Turn left at Marienplatz and walk to Odeonsplatz that is surrounded by many of Munich’s most famous attractions: the Theatinerkirche (a baroque church), the Feldherrnhalle (a copy of the Loggia dei Lanzi in Florence), and the Residenz (Germany’s biggest inner-city castle featuring the royal treasures of the Bavarian kings.)

Exhausted from all the sightseeing and history? Lunch time! Head to the English Garden, one of the biggest inner-city parks in the world, grab a sandwich on the way and eat it while sunbathing in the park or watching the surfers at Eiskanal. You can also go to the biggest beer garden in Munich, the Chinese Tower, and have some Schweinsbraten (pork with dumblings and red cabbage) for lunch – with a “Maß” (one liter) beer if you’re feeling thirsty.

Take the subway to “Olympiapark” to check out BMW’s headquarters and visit the BMW World museum. The Olympia Park itself, dating back to the 1972 Munich Olympics, is right next door, and a lovely place for an after-meal walk/hangout.

17.00: Relax while peoplewatching in Schwabig

Head back to the city and find a nice bar or restaurant at Schwabing or go to my favorite beer garden/bar/restaurant in the city: Park Café (in a small park close to Stachus.) If you really want to feel like a local, try to catch a Bayern Munich game in one of the many beer gardens or – even better – at the Allianz Arena, another one of Munich’s famous landmarks.

There are several popular clubs in the inner city: 089 and Pascha are just two of them. The dress code really matters in Munich, so make sure you dress up and leave your sneakers at home (Germans didn’t give the residence of Munich the nick name “Schicky Mickys”, shorthand for posh & “hoity-toity”, for nothing!) And if you feel like going really posh, head over to the P1 club and spend the night dancing with football players, millionaires and movie stars!

PS: When you visit Munich at the end of September your itinerary is even easier: Just spend your whole day at the Oktoberfest!

I hope you have a wonderful day in beautiful Munich!

Tags: Travel tips, Germany, Munich
Learn German in MunichLearn more
Get the latest on travel, languages and culture in the GO newsletterSign me up