5 things you absolutely must eat in New York City 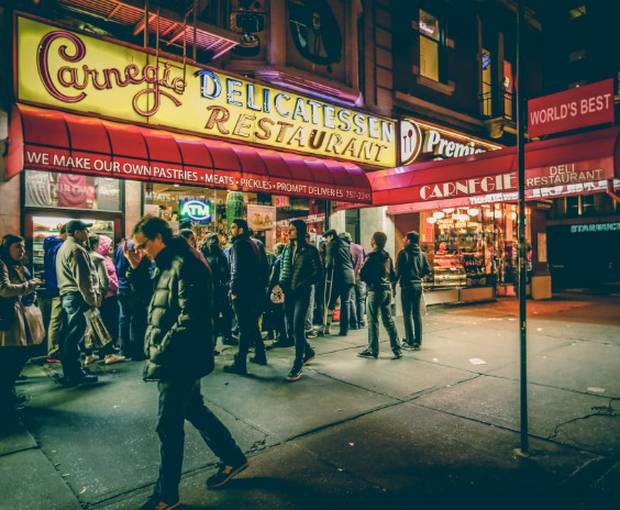 There are so many things to love and appreciate about New York City that it’s hard to really list them all. I mean, it’s the birthplace of Hip Hop, musicals were invented here, and the subway runs 24/7. It’s literally “The City that Never Sleeps” and because of that, you can pretty much eat anything at any time. For me, this is unquestionably the best thing about New York City. Thus, I give you five things you absolutely must eat in New York City, no matter what time it is.

When you think of a “New York delicacy,” most people tend to think of the classic bagel and coffee combo. Hand-held and ready for the fast pace of the city, the breakfast bagel is simply the best way to start your day. In New York, bagels are typically boiled briefly before they’re baked which is why they’re chewy on the inside and firm on the outside. Forget the paleo diet, a day without carbs (or at least an NYC bagel) is not worth living.

The next “New York delicacy” on the list is the classic New York pizza “slice.” You can find one for about $2.50 from one of the 185,000 pizza establishments dotted around Lower Manhattan. Again, the fast pace of life in New York City has clearly influenced food choices: slices of pizza can be eaten in under five minutes standing up with no utensils. Just be careful, pizza sauce and grease have an undying attraction for freshly laundered white shirts.

New York is a melting pot of cultures, languages, and industries, and it’s no surprise that its demographics are reflected in the food. Hailing in influence from multiple Latin American influences, the arepa has become a staple of the New Yorker diet. Stuffed with soft, salty white cheese, shredded beef, black beans, and sweet plantains, arepa sandwiches are clean and compact for – you guessed it – eating on the go.

Keeping up with the multicultural theme, this Georgian (like the country, not the American state) delicacy can be found at Cheesboat Brooklyn and is basically exactly what the bistro name implies – a cheese boat. The cheese bread is topped with an egg, a cube of butter, and loads of wholesome goodness. Warning: do not ask how many calories are in this meal.

Yes, you read that correctly, bringing the best part of a grilled cheese sandwich and the best part of a doughnut together, the grilled cheese donut is a harmonious marriage that is beneficial for everyone. It doesn’t get more American than this. Also, since cultural immersion is the ultimate goal of travel, you have to try at least one. Right? Right! You can find these delicious treasures at Clinton Hall. You’re welcome.

Tags: Travel tips, City life, New York, Food, American
Get the latest on travel, languages and culture in the GO newsletterSign me up