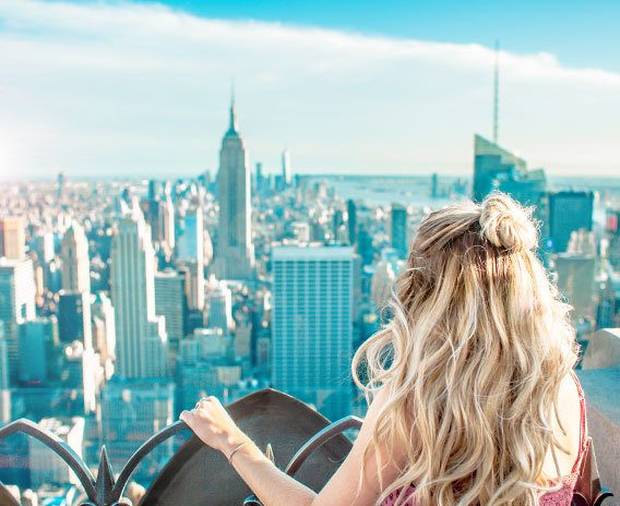 New York, the city that never sleeps – and where you won’t have much time to sleep either. From spending your days cycling around Central Park and shopping on 5th Avenue, to your nights frequenting Speakeasies and discovering all the hidden gems, one thing’s for sure: you just do not have time to waste wondering what to caption all your iconic #NYC Insta pics.

No worries, we’ve got you covered.

“Welcome to New York. It’s been waiting for you.” – Taylor Swift

Don’t pretend you don’t know this song. You know it.

“New York City’s the place where they said, ‘Hey, babe, Take a walk on the wild side’” – Lou Reed

T-Swift not your thing? New York native and iconic alt-rock singer Lou Reed should be perfect then, as you browse indie record shops and backstreet jazz bars.

“I want to wake up in a city that never sleeps.” – Frank Sinatra

An absolute classic – no explanation needed.

“New York, concrete jungle where dreams are made of, there’s nothin’ you can’t do now you’re in New York.”

A 00s classic and impossible not to belt out when touching down in NYC.

Once upon a time in New York

Taking a bite out of the Big Apple

I’m so happy we MET

The city that never sleeps…

3. Literary quote captions to show how #deep you are

Use these words so make sure all your followers understand that this is who you are now. #NewYorkNewMe

**”**I love New York on summer afternoons when everyone’s away.” – F. Scott Fitzgerald (from The Great Gatsby)

Ok, so you might struggle to actually get a picture where ‘everyone’s away’ (summer in NYC is just as crazy as any other time of year). But if you can get a picture of yourself gracefully lounging in Central Park why not pretend to be Daisy, or the great Gatsby himself?

**“**Give me the streets of Manhattan!” – Walt Whitman

Dated 1900(!), Whitman’s poem Give me the splendid silent sun is the perfect way to express that #lustforlife which New York creates.

“Once you have lived in New York and made it your home, no place else is good enough.” – John Steinbeck

Already sharing a nostalgic #throwbackthursday before you’ve even had to leave? Then this is the caption for you.

“New York had all the iridescence of the beginning of the world.” – F. Scott Fitzgerald

Another Fitzgerald #sorrynotsorry. But if this quote just doesn’t capture the ephemeral beauty and magic of NYC then I don’t know what does.

And finally, from the queen of New York City herself, fictional character Carrie Bradshaw (from Sex and the City):

“Anything is possible. This is New York.”

Tags: New York, Instagram
Learn a new language abroadLearn more
Get the latest on travel, languages and culture in the GO newsletterSign me up