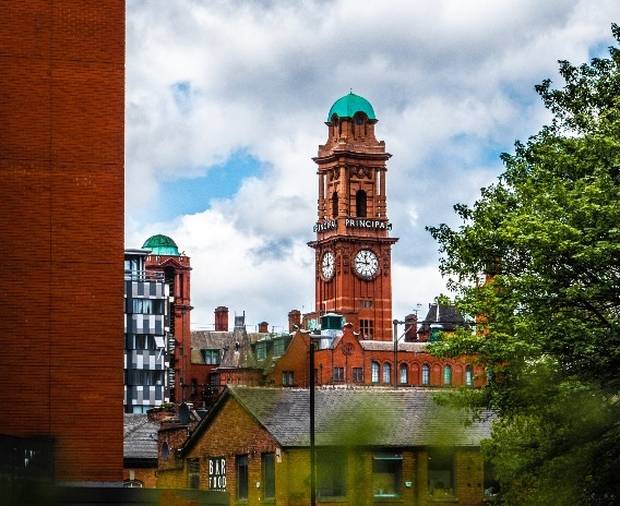 Manchester’s industrial past combined with a modern hipster vibe make it an iconic British city that has plenty to entice visitors. Visiting the revived arts spaces, underground bars, cool neighborhoods and street art is a great way to get a taste for what the city is all about. So check out some of these hidden gems waiting for you to discover in Manchester.

Get a glimpse into Manchester’s past through the brass peepholes scattered throughout the northern Ancoats district, recently voted one of the world’s coolest neighborhoods by Time Out. With no official record of how many or where they are, part of the fun is exploring the area and stumbling upon one. But don’t worry, there’s plenty to keep you fueled up as you explore, as many of Manchester’s beloved eateries call Ancoats home. Grab a coffee at Ancoats Coffee Co., a cruffin (a hybrid between a crumpet and a muffin) at Pollen or a pizza at Rudy’s.

While summers are pretty mild in Manchester, it’s still nice to spend the day by the water to cool off. For something a little different and for a fun day out of the city with friends, pay a visit to Heaton Park boating lake. Recreate your own “Notebook” moment as you paddle around the leafy lake, a short 20-minute tram ride from the city center. The historic row boats and pedalos are available from the start of April until the end of October and cost £8.50 for 45 minutes.

If there’s one thing Manchester does well, it’s nightlife. And those drinks taste even better if you have to work for them. So spend the night touring the city’s best hidden bars and speakeasies. Start at The Washhouse, where instead of doing a few loads of washing, you can sip on delicious cocktails in stylish surroundings. Cap the night off at Science and Industry, a bar within a bar occupying Cane & Grain’s top floor, where they take experimental cocktails to the next level.

Once you start looking, you can’t stop seeing bees throughout Manchester. The city’s best-known symbol, the worker bee, represents the Mancunian hard work ethic and hive of activity. Many local businesses and buildings have included the bee as part of their decor, which makes bee-spotting a fun way to explore the city. Keep your eyes peeled as you wander and you’ll see them everywhere! Don’t miss the Manchester Town Hall, the University of Manchester and Kimpton Clock tower.

What is UV Cricket? This world first has just opened in Manchester’s indoor cricket complex Sixes, allowing budding cricketers to show off their batting skills under UV lights. Whether you’re a lifetime lover of the gentleman’s game, or you’ve never held a bat in your life, you’ll have fun smashing balls in this disco atmosphere. Afterwards, fuel up on a massive BBQ platter and delicious cocktails. Best of all, students get 50% off.

Ditch the high street boutiques and step into Afflecks, a bustling fashion marketplace with dozens of independent stalls and boutiques spread over four floors. Offering one-of-a-kind items, handmade crafts, artwork, vintage and eclectic fashion, it has just about everything you can imagine. With ever-changing inventory and stallholders, you will find something new on every visit. It even has a hairdresser, Thai massage, tattooist, tarot card reader as well as food and drink stalls.

What to do with a disused Edwardian swimming pool? Turn it into an events space of course! They regularly hold film festivals, markets, live music concerts and shows in the stunning venue. It’s also featured in a number of popular TV series including Life on Mars and Peaky Blinders, and you can learn more on a tour of this unique hidden gem.

There’s plenty for foodies to discover in Manchester. When your stomach is rumbling, but your wallet is empty, pay a visit to Curry Mile. Just a short walk from the EF Manchester campus, this short stretch of Wilmslow Road has over 70 Indian, Pakistani and Bangladeshi restaurants serving up delicious meals throughout until late at night. While it’s hard to pick a favourite, Mughli is often rated as one of Manchester’s best Indian restaurants, even visited by actor Jared Leto.

Join students from the nearby University who love to relax in the sunshine at Whitworth Park. This beautiful green area has plenty of space for jogging, dog walking, ultimate frisbee and picnicking. In summer the gates stay open until 10pm, so you can take your time exploring the sculptures dotted throughout the park, or sweating it out at the outdoor workout area. Don’t forget to bring some nuts for the friendly squirrels who call the park home.

Several kilometres of underground tunnels lay just under the surface of Manchester’s streets. From escape routes for those facing religious persecution, to an old tube station that was never used, and air raid shelters used during the war, this complex tunnel system is full of history. While some of the tours are currently suspended, you can learn more about them here, or join a Haunted Underworld tour under the Great Northern Goods Warehouse.

Tags: UK, Travel tips, Student life, English, Hidden gems, Manchester
Get the latest on travel, languages and culture in the GO newsletterSign me up