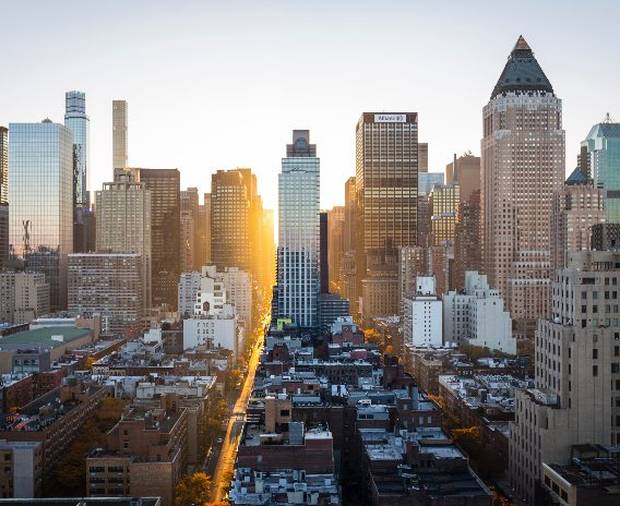 The definition of a bustling metropolis, New York City charms the masses with its dynamic and eclectic character, its diversity and its never-ending options for dining out, shopping and enjoying art and culture.

The reasons to love New York are manifold, so in the interest of order and efficiency, we’ve whittled it down to ten of the very best.

With 800 languages spoken in New York City, it’s been crowned the most linguistically diverse city in the world. If you’re looking to learn English with that classic New York accent (and just a hint of attitude), while enjoying the diversity of accents and views that those 800 other languages bring, this is your spot.

Highlighting the shopping in one of the world’s fashion capitals may seem somewhat banal, but retail therapy conducted in New York is unlike anything else. Fancy a Blair Waldorf-esque experience? Wander down 5th Avenue and pop into the designer boutiques and department stores lining the avenue.

Want something a little more unique and eclectic with a few high street classics throw in? Head down to SoHo or the Meatpacking District near the famous High Line park. For a more budget-friendly experience and truly unique brands, head over to Brooklyn.

New York truly is a concrete jungle personified. With skyscrapers towering over the city and often obscuring any view of the sky, the vast expanse of grey can leave you yearning for open green spaces. Good thing Central Park is located smack bang in the middle of the city, providing busy New Yorkers with a place of meadowy refuge. Stretching across 843 acres of land, the park is almost six times the size of Monaco. It also happens to be the most-filmed public park ever, having been featured in over 350 movies over the years.

It should come as no surprise that the most linguistically diverse city in the world is also very diverse as a whole. The base of the Statue of Liberty is adorned with the words “Give me your tired, your poor, your huddled masses yearning to be free … I lift my lamp beside the golden door”. The words carry as much meaning for immigrants today as they did for the 12 million immigrants who came through Ellis Island between 1892 and 1954. New York opens its arms to everyone, creating a wonderfully diverse community.

Whilst there’s no uniform style or fashion in the city, there is one thing that unites all New Yorkers: they are unashamedly themselves and dress in a way that reflects exactly that. In this city, eccentricity thrives alongside cool street style and elegant silhouettes. Long-time city dwellers have also likely seen it all, so even if you decide to wander outside in your pajamas, chances are no one will bat an eyelid.

New York has long been the US capital for artists with over 55,000 living in the city. The streets are dotted with galleries – from small collections featuring local artists to the internationally renowned Museum Of Modern Art and the wonderful if less well-known Neue Gallerie on 5th Avenue.

In addition, New York is home to some of the best theatre and musical shows on and off Broadway, as well as some of the best live music and stand-up comedy in the world. You could spend weeks in the city catching a different Broadway or comedy show every night and never run out of options.

For those who prefer to avoid the efficient yet somewhat daunting subway system, New York – Manhattan in particular – can easily be navigated by foot. Walking from place to place is a great way to see the city while getting a feel for its character, but do come prepared with the right kind of footwear (your tired feet will thank you!). You’ll be blown away when you see how many steps you take on an average day in NYC and how much you can really see.

Much like the park located in its heart, NYC is the most filmed city in the world. For decades its towering buildings and bustling streets have set the scene for everything from rain-drenched romantic reunions to heated fights, as well as some of the most popular shows of the past decade, from Friends and Sex and the City to Gossip Girl. Wander the city solo and spot famous film sites or take a guided tour so you can hit all your favorites in one go.

Boasting one of the most famous skylines across the globe, New York is home to a multitude of famous sights and buildings that you really can’t miss. Even a brief stroll through the city will likely lead you through at least a few legendary locations, including The Empire State Building, the Brooklyn Bridge, Rockefeller Center, Wall Street, Time’s Square, The World Trade Center site, The High Line… the list goes on and on.

Hidden down nondescript streets and tucked away within inconspicuous-looking fast-food joints, are fragments of a whole world of “secret” restaurants and speakeasies – something New Yorkers love. One such location is La Esquina, a brasserie located in a Mexican taqueria. If you head to the back door inside the diner, walk downstairs and through the kitchen, you’ll find yourself in an entirely different, moodily-lit restaurant. It’s worth doing some digging before your stay in NYC, as there’s a lot more to it than meets the eye.

Tags: Culture, New York, Traveling, Sightseeing, Shopping
Get the latest on travel, languages and culture in the GO newsletterSign me up