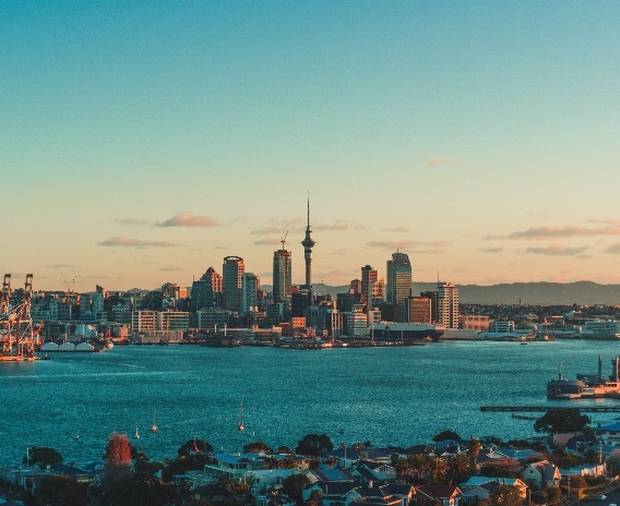 A nature-first city packed with beaches, harbors, islands, and 48 dormant volcanoes? It could only be Auckland.  Long forgotten to New Zealand’s ski towns, Auckland has made a strong comeback – and it’s easy to see why. Here are 10 reasons to love Auckland.

Just looking at Auckland’s location on a map is enough to know this is a #blessed corner of the planet. To the east of the city you’ll find peaceful, calm bays for a weekday swim. To the west you’ll find 3 beautiful W’s: walking trails, waterfalls, and wild beaches. In short – it’s time to get exploring.

Speaking of walking, the picture perfect paths just keep coming at you, both in and out of Auckland itself. Ready to go “tramping” as the Kiwis say? Try the North Shore Coastal Walk (a 7-hour long trail linking bays), Rangitoto Island Summit Walk (a moderate ascent of this dormant volcano with rewarding panoramic views from the top), or hour long Pukekawa Trail Lovers Path through native bushland.

Charmingly, Auckland has its own working farm in Cornwall Park in the heart of the city. In action for close to 100 years, there are 600 sheep and 60 cows living on the land, a number that quickly gets bigger when lambing and calving season rolls around. It’s impossible to feel anything but delight looking at wobbly baby animals learning the ropes of life!

If there’s a place where wine is served with an unbeatable view every time, it’s in Auckland. Chardonnay, Pinot Noir and the Bordeaux varieties – Cabernet Sauvignon, Cabernet Franc, and Merlot – have found a Southern Hemisphere home in the region’s rolling hills. Start your wine tour in Kumeu, then continue tasting your way around Matakana and Waiheke Island.

For its size, Auckland rates a surprising number of excellent cheese shops. Cheese-lovers will enjoy a trip out to The Cheese Room in Milford or the Puhoi Valley Cheese Company for mouth-watering aged, soft, fresh, and yellow cheeses (you’ll thank us when you try their triple cream brie!).

Moving on from cheese to food in general, Auckland serves up super tasty, relatively inexpensive options for international fare all year around. With everything from gourmet treats to sweets and hearty comfort food, do yourself a delicious favor and sample your way through the city. Need a specific idea? The Seafood Festival and La Cigale French market are more than memorable – or you can even challenge yourself to a spot of fishing and catch your own dinner at the Shelly Beach Wharf.

Kiwi slang is evocative and wonderful. From jandals (flip flops) to chilly bin (cooler), you’ll soon be greeting all your friends as bro or cuz. Like what you’re hearing? Add chur (thanks), choice (great), stink one (oh nooo), pack a sad (throw a tantrum), gizza (give me), hangus (someone who eats a lot), bach (holiday home), and oh so many more to your list!

Rugby is clearly big in New Zealand and in Auckland you’ll be backing the Auckland Blues. Based at Eden Park, the country’s largest sports stadium, those not from rugby-playing countries may take a moment to learn the rules, but the effort is well worth it. While in Auckland, dare yourself to be a fan: the experience of cheering on the Blues at this 50,000 seater stadium cannot be missed!

End a gorgeous Auckland day with an even more perfect sunset. With nooks to watch the rays to the north, south, east, and west, pack a picnic basket (maybe with some of those cheeses you sampled earlier on?) and snuggle up. Try North Head, Bastion Point, Piha, Muriwai, and the aptly named Sunset Beach. Or, zip up the Sky Tower itself for a 360 degree sunset feast for the eyes.

Tags: Travel tips, English, New Zealand, Auckland
Get the latest on travel, languages and culture in the GO newsletterSign me up

Your quick guide to making the most out of Miami
By Chelsea · 4 min read
Young Adventures: 5 Tips for Young Travelers
By Karla Garcia · 3 min read
Why you should plan a slow travel trip this year
By Emma · 4 min read
Why learn Russian
By Finola · 5 min read
See more from