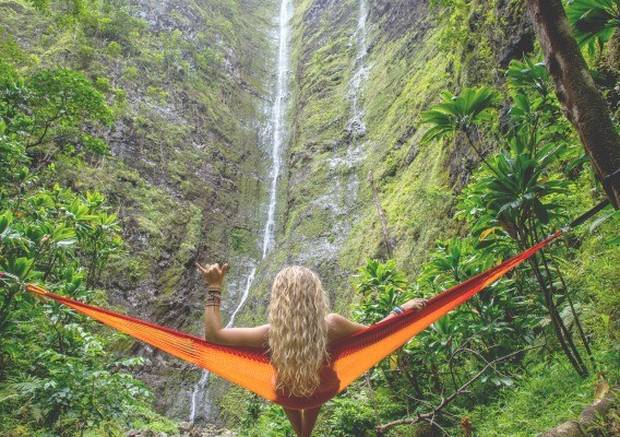 It’s like Heaven on Earth: The beaches are beautiful, the culture cool, the sea sparkling and the surf better than pretty much anywhere else in the world. There are 1001 reasons to love Hawaii, but I’ve done my best to bring it down to ten. Here are my top 10 reasons to love this Pacific gem – and to pack those bags today. (Yeah, like right after reading this article.)

1. It’s all about the dance

Hula dancing is probably one of the most iconic things about this group of islands – and it’s about so much more than the grass skirts and leis (those flower garlands you see in pretty much every movie set in Hawaii). It’s a grueling athletic art of bent knees and blisters which tells stories and legends of ancient Hawaiian culture and traditions through a combination of dance and song. My history classes would have been that much more memorable (and effective) if they had been set to some beautiful swaying!

2. And about the parties

Luau is basically the kahuna (meaning a very large wave in surfing terms) of parties. You normally get served a buffet of all-you-can-eat seafood, meat and everything in between, so don’t even think about dieting or how you would look in a bikini – it’s all about having a good time and enjoying yourself with as few worries as possible. After gorging your face, you’ll have the pleasure of watching some traditional Polynesian dancing and maybe a Samoan fire dancer as well.

Remember when I told you about enjoying yourself with as few worries as possible? I need to keep repeating it because it’s essential to the Hawaiian way of life. A few posts ago I discussed how the Hawaiian language focuses a lot on a relaxed lifestyle, and perhaps unsurprisingly, it doesn’t stop with the language: It’s all about a slow(er) pace, balance between yourself, those around you and the environment, and just living every day with love, happiness, and kindness in Hawaii. It might sound too good to be true, but trust me, it just as good as it should be.

4. The underwater world is glorious

Snorkeling and scuba diving are an absolute must in Hawaii: What better way to start the day than swimming alongside our fish hoaloha (Hawaiian for friend) and probably older-than-your-grandma turtles. Molokini is a great place to start – it’s more like a submerged volcanic crater than a small island and is home to more than 250 marine species. Seeing the ocean floor in all its colorful glory is an experience you’ll never forget.

5. The hiking opportunities are stunning

If you’re concerned about getting exercise in during your vacation, stop worrying, seriously. I already said that it’s not allowed here. But secondly, Hawaii has plenty of national parks and mountains that will let you get in some exercise – especially for your legs – without making an extra effort. Find yourself in the Haleakala National Park, for instance, and go on a three-hour hike (give or take) on the Pipiwai Trail as you trek through a relaxing bamboo forest and end up at the 400-foot tall Waimoku Waterfall. Oh, and don’t miss a swim at the Seven Sacred Pools!

6. The pineapples are plentiful

Do not take fresh fruit for granted. I mean, if you live in a tropical area all year long, I am envious. But for those of us that live in colder, harsher climates, having an abundance of fresh fruit available all day, any day is truly an amazing thing. Mountains of pineapples may not be a unique reason to love Hawaii, but boy do they make a stay that much more enjoyable!

7. And the surf’s world class

What better place to learn how to surf than its birthplace? Surfing was practiced by the ancient Hawaiians and was not considered a sport or a hobby; it was an integral part of their culture and was more of an art than anything else. This art form was called he’e nalu which is Hawaiian for “wave sliding.” Before they went into the ocean, they would pray to the Gods for protection and strength to overpower the mighty ocean – much like what we do before we ask something from our mother or boss.

8. The volcanoes are alive

Making your way up to the 10,023-foot summit of Haleakala is not for the weak. There are new regulations that require a reservation to go up for sunrise viewings, but the battle up is totally worth it. There are also five active volcanoes in Hawaii and I would recommend watching the Kilauea Volcano which has been continuously erupting since 1983 and is considered one of the most active volcanoes in the world. And yes, it offers up exactly the kind of crazy, National Geographic-worthy scenes with the lava plunging into the ocean that you might imagine.

9. The Humpback whales call it home

While there is plenty of attention-worthy wildlife in Hawaii, one of the most impressive are probably the 30,000 kilo ocean dwellers that play around the island of Maui. The best time to see them is between January and March as more than 10,000 whales make their way to Alaska for mating, birthing, and nursing.

10. Great coffee’s all around

No, I’m not talking about Starbucks here. On Kona island, there are hundreds of coffee farms that grow, harvest and brew their own coffee and which you can find in abundance in the many coffee shops dotted around the island. It has a very distinct taste due to its high elevation, constant cloud coverage and rich volcanic soil from the Hualalai Volcano. And who needs wine tasting when you can go to Daylight Mind for “coffee cupping” to find your favorite brew instead?

Tags: Language learning, US, Hawaii
Plan a language learning vacation!Learn more
Get the latest on travel, languages and culture in the GO newsletterSign me up