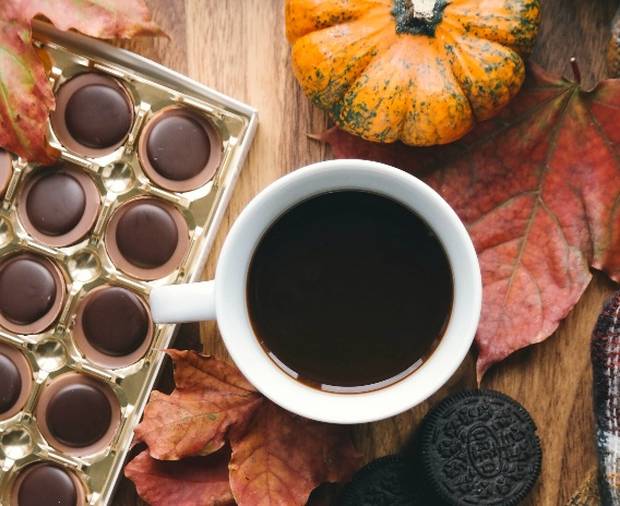 Hey, you! Stop what you’re doing. Here’s an article that may just provide the inspiration you need to create a little bit of bliss this fall. We’re talking about Netflix shows, of course.

There’s no better way to spend a cold, blustery autumn afternoon than sat by a crackling fire in your pink wooly socks. You’re covered in a blanket with a bubbling mug of hot chocolate in hand, which features a fountain of marshmallows, threatening to cascade over the rim into your lap at any moment.

Add five binge-worthy Netflix shows to this most delectable scene and you’re basically now living in a modern romance. Therefore, the only pertinent question that remains is this: are you ready to blast 150+ hours of free time that you cannot – and would not actually wish to – reclaim?* Us, too. Read on.

Without further waffle, here are our top five binge-worthy Netflix shows to watch this fall. We’ve deliberately picked a quintuple of feel-good series, in order to remedy the melancholic scene of rusty leaves falling on your windowsill and leave you feeling refreshed.

From the creator of Sex and the City, Emily in Paris is one of those mildly cringey but incredibly uplifting and heartwarming shows about an enthusiastic and talented American marketing professional who relocates to Paris to oversee her company’s merger with a French agency.

I can pretty much guarantee that you’ll fall in love with Paris (again, if you have already) and want to actually be Emily. Ahh, the cuisine; the culture; the literature; the architecture; the Parisian style. Take me there!

This one is quirky, hilarious, and also makes you think a bit. The main character, Eleanor, accidentally ends up in some sort of heavenly afterlife, which she finds a bit confusing considering she’d lived a life of pure selfishness.

Character development is off the charts, plus it will leave you feeling mentally invigorated (or reinvigorated, depending on where you’re at to begin with).

I’ve dropped this on the list because it’s almost impossible not to love it. This show is a tour de force. It’s so so good, and so so funny. Captain Holt delivers jokes with such deadpan dryness that you can’t help but giggle, irrespective of if you find the original joke funny or not.

The other characters are so relatable, silly and wholesome – and the writers have placed them at the very heart of each script – meaning that you end up genuinely loving them.

Ok, this one isn’t particularly recent, although they have just released a new season. The Dad, Phil, is such a great character that it’s worth watching just for him. He’s silly and childish, but he always has the best interests of his family at heart, which makes you instantly warm to him.

If you want a realistic portrayal of family dynamics, plus a consistent dollop of humor, get this one in your eyes and ears.

A very wealthy family loses everything and has to move to a motel in the middle of nowhere. Silliness ensues, and thanks to the ridiculous nature of the characters, there are several laugh-out-loud episodes. Sassy, grumpy David is my personal favorite character, but they’re all pretty loveable.

You can binge this one in a single week, if you are well-equipped with a hefty bowl of nachos on tap, sweet and salty popcorn, and zero desire to experience the wind-whipped, rain-lashed autumnal streets outside.

Tags: Language learning, Culture, Netflix, Fall, TV
Get the latest on travel, languages and culture in the GO newsletterSign me up