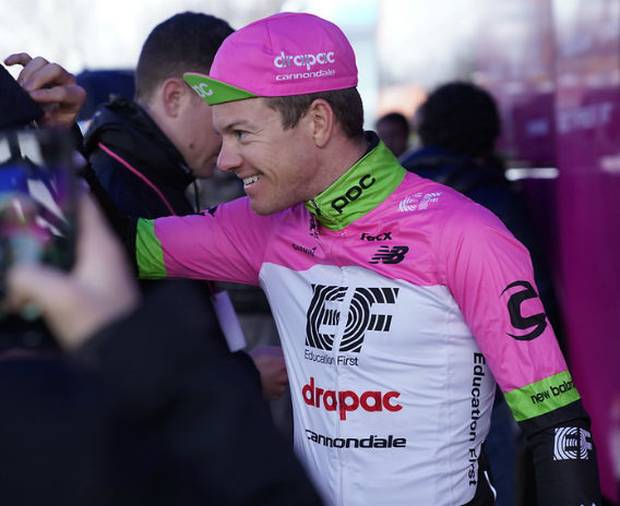 By age 17, Simon had enjoyed some successful results at the club and Australian national level and was recruited by the Australian Institute of Sports (AIS) to join the national cycling team at their European Training Center in the town of Gavirate in the province of Varese in northern Italy.

Moving abroad to a foreign country as a 17-year-old, Simon was faced with a new culture, a new language, and a competitive field of riders all fighting for a few spots on the UCI World Tour’s best teams.

We caught up with him for a brief moment to get the story of this dramatic move and his long-lasting infatuation with the Italian landscape, culture, and people.

Q: To start off, Simon, could you give us a brief introduction of who you are and how you’re affiliated with EF Education First?
A: My name is Simon Clarke. I’m a professional cyclist from Melbourne Australia, and I ride for EF Education First-Drapac powered by Cannondale.

Q: Looking back, can you tell us a little bit about how you got into cycling and how it lead you abroad to Europe?
A: I got into cycling through my passion for riding bicycles. From the age of 13, I rode my bike every day and really loved it, so I joined a cycling club and slowly worked my way up through the ranks in Australia. By the age of 17, I made the Australian team and was brought to Europe to race on the world tour. That’s what brought me to Italy and began my experience living abroad and learning the Italian language.

Q: When you arrived in Italy, what did you think? Would you have believed you’d still be here 15 years later?
A: When I arrived in Italy for the first time, it was definitely a shock to the system. I had to learn not only the Italian language but also the Italian culture and how to live on my own away from my family back home in Australia. So, it was definitely a big challenge. Honestly, thinking back to that time, I never would have thought that 15 years later I would still be living in Italy and able to speak fluent Italian.

Q: As a kid growing up outside of Melbourne, Australia, did you learn any other languages besides English in school?
A: In school, I learned Japanese and Indonesian. Unfortunately, neither of those are European languages, so they haven’t gotten much use lately.

Q: How did you learn Italian?
A: I learned Italian through immersion and living in Italy for many years. I also did a short university course back in Australia, but mainly it was learning from the locals and having people speak to me in town and in my life that really taught me the Italian language.

Q: What do you think are the biggest benefits of speaking Italian either at home in Andorra or while traveling for races?
A: Well, when communicating with Italians, being able to speak Italian is the definitely the best thing. But, as an Italian speaker, you can already understand some Spanish and French, as they’re all very similar. It definitely opens a lot of doors when living in Europe.

Q: Do you have any advice for people moving abroad?
A: Learn the language of the country you’re moving to as soon as possible. Once you’re able to speak the local language, it opens so many doors and makes life so much easier when living in a different country.

Q: Last words for the fans?
A: Thanks, and I hope to see you at a race soon!
Grazie mille e ci vediamo alle corse!

Tags: Italian, Italy, Sport, EF Talks, EF Pro Cycling, Cycling
Learn Italian with EFLet's go!
Get the latest on travel, languages and culture in the GO newsletterSign me up