How to live like an Olympian – Q&A with DeeDee Trotter 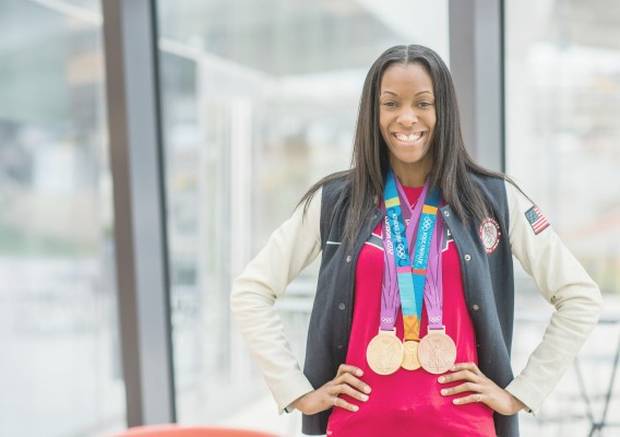 When you have two Olympic gold medals and one bronze under your belt, it might be tempting to hang up the running shoes and spend the rest of your life basking in Olympic glory. But DeeDee Trotter, an American athlete with relay and 400m medals from the 2004 and 2012 Olympics, has always thrived on defying expectations. Following retirement from professional sports, she’s become a motivational speaker, a brand ambassador and an EF Olympic Ambassador (more on EF’s role in the Olympics here), and is now sharing her remarkable story of perseverance and hard work with the world.

We sat down with her to discuss her career – and its defining moments – and to ask what us mere mortals can learn from a sporting god like her.

Can you share a defining moment from your career?

A lot of people say their defining moment is paired with their most triumphant moment. In my career, the defining moments didn’t always come when I was winning. My defining moment was when I won the bronze medal in 400m in 2012. It was quite a journey up to that point. It took me four years to get back to a point to be able to compete on another Olympic stage. I had a knee injury and that almost destroyed my entire career. Coming back in 2012 and being able to get on the Olympic podium and run the race of my life after knee surgery and three years of terrible performances was amazing. The mental ability and the perseverance it took to even get to that point are truly what defined me as an athlete and also showed me what I was made of as a person.

What kept you going during those three or four years?

The truth. I knew I had something left in me. I knew that if I just kept pushing, I could get there, even though everything that was happening in my life told me otherwise. It was this little nagging voice that just kept saying: “You’re not done, just keep going.” And every day, regardless of the outcome of the day or how I did on the field, this little voice just wouldn’t let me stop. It just kept saying: “You got more in you, just keep going.” For four years. I call that voice inside the “inner champion”.

Is this the kind of advice you give to our students all over the world?

Absolutely. That is the message. It’s a never-give-up mentality. I think most people – at least the ones I’ve come to contact with – can relate to that. What I say to each group is a bit different every time, of course – and depends on what kinds of questions they ask and what kind of issues that throws up – but overall it’s really about finding that champion inside each person and about challenging you to be your best, no matter what you’re up against in life.

What motives you to tell your story and what makes it valuable beyond the world of sports?

When I do one of my talks I don’t want people to leave and say to themselves: “Oh, DeeDee said some really inspiring things today.” I want that person to walk away with this thought instead: “You know what, I need to work on being better for me. I need to work on pushing toward my own goals.” That’s what I want to ignite – that sense of purpose and determination. It’s not enough for me to just tell a really cool story. That’s what I try to do, of course, but I try to really go beyond that – to give people the tools to improve their lives and to not give up on themselves.

What lessons can students draw from your story? How can it help them achieve their goals?

It wasn’t my dream to be an Olympian when I was younger. It was something that just kind of happened as a result of some really hard work and an undeniable talent. I had dreamt of becoming a basketball pro, and although I lived in Atlanta during the 1996 Olympic Games, I wasn’t paying very much attention to the magnitude of the event, I was just a 14-year old kid running around the Olympic park for fun. While running wasn’t my dream I kept running because it became a gateway to reaching my other goals and I ended up taking it all the way to the top. I’ve come to appreciate the Olympics themselves since then, of course, but mostly by being part of it – by being immersed in this event that truly brings the world together. It’s about peace, passion, hard work, global unity, competition, pride; it’s impossible not to be inspired by it when you’re there.

For students, I’d say it boils down to hard work and perseverance. There is no way around it. You will not learn if you don’t put in the hours. But in the case of learning languages, I’d say it’s also about inspiration. I was inspired by the international character of the Olympics, and anyone learning a new language should feel that same spirit because it’s another way of meeting the world, of getting to know people from different cultures and of breaking down barriers. You know, the Olympics only happen every few years, but there’s no reason why the world shouldn’t feel and act more united the rest of the time!

How important is the work of EF and the Olympics?

It’s great to be part of EF’s mission of opening the world through education. It’s something I really believe in, and it’s the perfect message to combine with Olympic values. Both organizations are trying to break down cultural barriers and through my work with EF, I have seen just how powerful learning a language and sport are at bringing people together.

I heard you started learning German – a pretty challenging language – how have you tackled that?

Yes, you know learning is learning no matter how you try to slice and dice. It’s a process of figuring out something that you don’t know. In track and field, you start by tying your shoelaces – it’s as basic as that – and in learning German, I’ve had to start the same way. And it’s been quite tricky for me, especially some of the sounds. But I know it’s all about practice and putting my skills to use each and every day – the more I talk, the better I get. As I said earlier, there’s really no substitute for practice, so I’m approaching it with that same determination as my sport.

And finally, besides the medals, what has running brought you?

The biggest gift of all has been the chance to share my story, and to encourage and inspire people, especially young people. I recently met a 15-year old girl at one of my talks and she came up to me and handed me a little gift with a beautiful note. It was a phone case made by a company that she started and the note said: “Thank you for inspiring me, now I know I can keep pushing”. And it made me cry. It was just so inspiring to see the impact my words were having and to see how professional she was. I can tell you I’ve never cried in a track meeting, I’ve never cried for a win or a loss, but I’ve cried with these amazing young people. I’ve cried for that part of my life that has been given to me because of the running. Without the running, I wouldn’t be here, so I’m really, really grateful for that.

Tags: Culture calling, Olympics
Feel inspired? Learn a language abroad with EFLearn more
Get the latest on travel, languages and culture in the GO newsletterSign me up