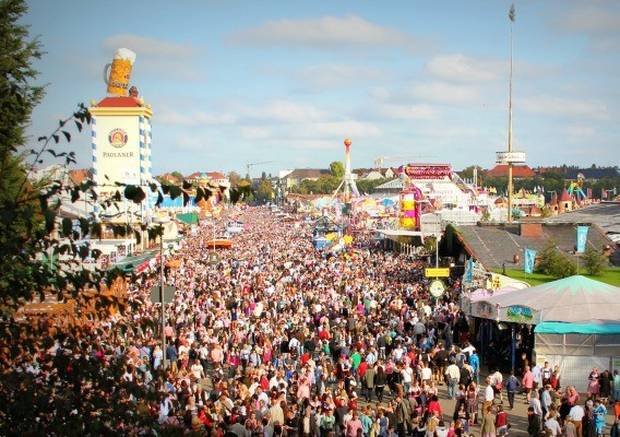 Ahh, it’s that time of the year again when drinking beer at all hours of the day is totally acceptable: Oktoberfest is here again! Before you pack your Dirndl and Lederhosen and flock to Munich to participate in this one-of-a-kind party, get to know the essentials with the help of our ultimate Oktoberfest guide, and make sure you get the most out of one of the world’s largest and most famous festivals!

What is the Oktoberfest?

The Oktoberfest takes place every September-October at Munich’s Theresienwiese (Wies’n, for short). The festival is made up of 14 different tents that seat between 1,000 to 4,000 people. Each tent has its own unique character, and it’s recommended to check out more than one. The Löwenbräu-Festhalle, the Hofbräu-Festzelt and the Augustiner-Festhalle are some of the must-visit tents. By the way, it’s a local tradition to go to the Oktoberfest at least three times – once with the family, once with friends, and once with colleagues.

The Oktoberfest is basically always busy – especially during the opening week. If you want a slightly less crowded experience, try to come during the last week of September. However, if you’re a fan of costumes and traditions, you might want to come on a weekend: The opening day (Saturday) of the festival is marked by a grand parade of carriages, floats, and lots of people wearing traditional costumes, while the festival’s second Sunday is all about a big outdoor concert with typical Bavarian music.

Beer, of course. All the beer that is served at the Oktoberfest comes from famous Munich breweries, such as Paulaner and Augustiner. If you don’t like one of Germany’s favorite beverages, you can also get all kinds of other drinks, including non-alcoholic beverages, wine and cider.

The Oktoberfest offers some fantastic local food and you should try as many of the delicacies as you can. Start off with a traditional Wiesn-Hendl (grilled chicken) and some Brezn (giant pretzel). Then, move on to Steckerl Fish (fish on a stick) or _Weisswurs_t (sausage). For those who are still hungry, I recommend the Ochsenbraterei where you can get roasted ox or Schweinshaxe (pork knuckle). For dessert, try some traditional cakes, gingerbread or pastries – my personal favorite is Apfelstrudel (a German apple crumble).

Entry to both the Oktoberfest and the tents is free.  One exception is the Oide Wies’n – the historical part of Oktoberfest that takes you back in time with old-fashioned beer, food, and rides; to enter, you have to pay a small fee (4 euro). Make sure you bring cash, as credit cards are not accepted. And how much cash should you bring? Well, that depends on how much you want to eat and drink: Usually, a Maß of beer (1 liter) costs around 11 euro, while food can cost up to 20 euro. It’s probably reasonable to calculate at least 50 euro per person – that way, you will have some spare cash for the rides and some traditional souvenirs, like one of those famous gingerbread hearts you’ll see everywhere.

In order to guarantee a safe festival, there’s a big fence around the area and you can only access the Oktoberfest through one of the 15 official entrances, which helps organizers make sure it won’t get too crowded. However, this also means that they will only let a certain number of people in, so make sure you come early or avoid busy days (aka the weekend). Note that big bags and backpacks are not allowed and have to be stored in lockers. (Ladies, don’t worry, purses are OK.)

Although it’s perfectly fine to go without reserving a spot at one of the tents (especially if you’re not so keen on the beer, are a smaller group, or don’t mind queuing), you can also reserve a place in one of the tents. To make a reservation it is best to contact the beer tent of your choice directly (don’t use third-party sites like ebay as most tents will automatically decline this reservation). But be sure to do this early as reservations open in December (yes, you read that right!) and most tents – particularly the big and famous ones – are sold out very quickly. Also remember that you can reserve a table for a maximum of 10 people. Although there is no actual reservation fee, you do have to buy some food and drink vouchers that you can later use in the tent – the minimum spend is 20 euro.

Insider tip: The big tents are usually sold out quite quickly. If you’re not an early bird, you might get a spot at one of the smaller tents or at an odd hour (the evening slots sell out first!).

Some useful phrases to learn

Yes, Germans do speak English, but it is always good to know your Oktoberfest lingo. I’ve compiled a few essential sentences that you should memorize – not only to score some brownie points with the locals but also to make friends and blend in when ordering food and drinks:

Where are the beer tents? Wo sind die Bierzelte?

Where are the toilets? Wo sind die Toiletten?

How much does this cost? Wie viel kostet das?

Do you have an English menu? Haben Sie eine englische Menükarte?

And just like that, you are ready to dive into your own Bavarian (beer) adventure at the Oktoberfest. Have fun!

Tags: Travel tips, Germany, Munich, Oktoberfest
Celebrate Oktoberfest in GermanyLet's go!
Get the latest on travel, languages and culture in the GO newsletterSign me up