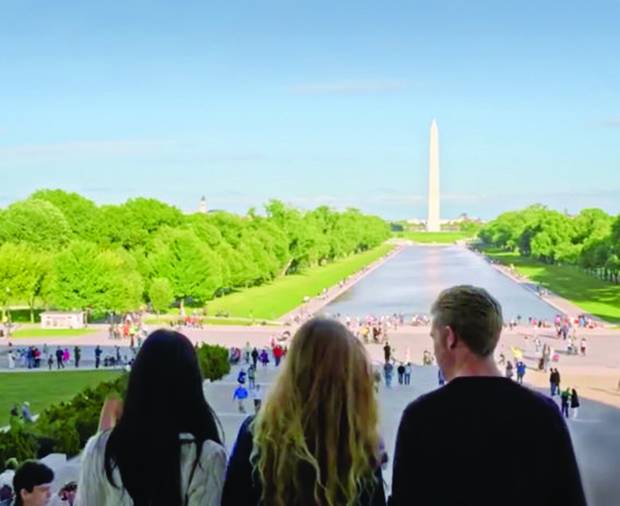 When someone mentions Washington D.C., its political status is often the first thing that comes to mind. Whilst the city’s rich political history is woven into the very fiber of its being, the reasons to love the Nation’s Capital are manifold.

If you’ve been searching for reasons to pay D.C. a visit, then look no further! Here are ten of the very best reasons to love Washington D.C.

What better way to practice your newfound English skills than with a good old healthy political debate? Politics are, unsurprisingly, at the center of the Washington D.C. universe, so most people have some form of an opinion on the current state of affairs. You can develop a classic American accent along with some serious political knowhow.

Washington D.C. has seen a total of 45 different presidents that, alongside countless historical events, have shaped it into the city it is today. From Martin Luther King Jr.’s 1963 “I Have a Dream” speech to President Obama’s 2008 inauguration as the first black President of the US, the city has set the scene for pivotal moments throughout history. Even the city’s Metro Farecards hold a little piece of history; the introduction of Chinese pandas Hsing-Hsing and Ling-Ling to DC in 1972 is the reason the panda image adorns Metro cards today.

3. Best of the seasons

If you prefer destinations that offer a full range of seasonal weather, then Washington D.C. may just be the city for you. D.C. is geographically located in the middle of the US and enjoys the best of all four seasons. Winter temperatures will go as low as -1ºC (30ºF), whilst summer offers a balmy 31ºC (87ºF). That means you can frolic in the snow in Meridian Hill Park come winter and sip drinks on the rooftop bar at Perry’s Restaurant come summer.

From the Air and Space Museum to the National Gallery of Art, the Smithsonian Institution offers some of the city’s most iconic cultural hotspots. Whether you’re looking to seek out hidden gems or explore all the classic locations, you’ll get a steady dose of American culture as you peruse the many highlights in the heart of the city.

If you’re looking to spot a landmark or ten, D.C. is the place to be. The White House stands tall as a legendary symbol of the United States of America. Built in 1792, the huge building features 132 rooms, 35 bathrooms, and six floors, and certainly makes for an impressive snap. For those pining after even more D.C. gems, the Washington Monument, Thomas Jefferson Memorial, and U.S. Capitol (to name just a few) are also well worth a visit.

Flanked by many of the museums of the Smithsonian Institution and home to a fair number of iconic monuments is the National Mall. The grassy park covers 59 hectares and is usually bustling with people making the most of the open green space.

A hub for dancing, Washington D.C. has easily accessible salsa, swing, and belly dancing classes and performances all around the city and metro area. Whether you’re a seasoned dancer or just want to try something new, D.C.’s got you covered.

When springtime rolls around in Washington D.C., many wait with bated breath for the annual blooming of the cherry blossom trees. After Japan sent the city 3,012 cherry blossom trees as a sign of friendship in 1912, D.C. has experienced cherry blossom season in full force. When the trees do start to bloom, many flock to the Tidal Basin and along the shoreline of East Potomac Park to see the flowers in all their springtime glory. Smaller clusters of trees can, however, be spotted around the city, so have your camera at the ready.

Second only to Ann Arbor, Michigan, Washington D.C. is one of the most educated cities in the US. With many universities offering the occasional free lecture nearby, there are always interesting people to be met and sparkling conversation to be had.

It’s rare for a city to be busy and simultaneously clean, but the US capital somehow manages to achieve both. The city’s population grows by 79 percent every workday, as people commute into the city for work. Usually, a city’s level of cleanliness dips when it comes to their public transport, but even with so many people passing in and out every day, Washington D.C.’s metro system is nice and clean. Not half bad, D.C.!

Tags: Travel tips, US, Washington D.C.
Get the latest on travel, languages and culture in the GO newsletterSign me up