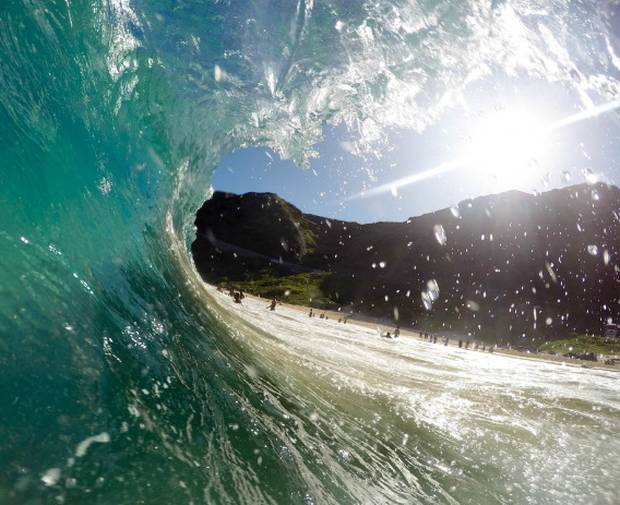 It’s the start of 2018 and you know what that means, “New Year, New Me!” But what about, “New Year, New Places?” Yes, personal development and growth doesn’t just happen in the gym or after a juice cleanse – it can also come from traveling. And while the world is full of amazing places to visit, these are my 10 top places to see in 2018.

The Middle East is full of wonders and Jordan is no exception. While you can float without effort in the Dead Sea or go on a desert escapade in Wadi Rum, Jordan is best known for its architectural masterpiece – Petra. Built into the side of a rock cliff, this UNESCO World Heritage Site was carved as early as 312 BC and was only rediscovered in 1812 by a Swiss traveler. If you’re into history and archaeology, then Petra should be at the top of your 2018 travel list.

Off the coast of Queensland in Australia lies more than 1,400 miles (or 2,253 kilometers) of the largest coral reef system on the planet. So, I mean, this should obviously be on your must-see list. Known as the Blue Outback, this World Heritage Site has thousands of species of fish and mollusks, hundreds of species of birds, sharks, stingrays, and dozens of species of dolphins, whales, and porpoises. I get overwhelmed just writing this – imagine what it’s actually like to see it in person? If you’re not a scuba diver, no worries! Snorkeling is definitely enough to enjoy one of the original Seven Natural Wonders of the World.

Kauai takes the medal for the rainiest place on earth. And while the rain may not be frizzy-hair friendly, all the precipitation definitely makes for a tropical paradise. Think… scenic hikes, indigo blue swimming holes, gorgeous bike rides, and fascinating dives through colorful coral reef ecosystems. For me, and apparently the Huffington Post, the best hike in all of Hawaii might be the Awaawapuhi Trail on Kauai. Scaling huge cliffs above the Pacific Ocean, the hike passes leads to some of the most breathtaking vistas you’ll find anywhere.

Get two countries for one when you visit Victoria Falls.Known as the “smoke that thunders,” the magnificent waterfall dividing Zambia and Zimbabwe is neither the tallest nor the widest waterfall on the planet, but its combined height and width does make it the largest in the world. Supposedly, the Zimbabwean side is more picturesque, but why not check it out from both sides and decide for yourself? If you’re a thrill-seeker, head to the Victoria Falls Bridge where you can either zip line across it, bungee jump from it, or leap off and swing over the Zambezi River. I mean… YOLO, right?

When you think of China, you probably think of the Great Wall of China and giant pandas, but that’s just because you haven’t heard of the Rainbow Mountains. While weathering and erosion generally tend to be fairly slow and boring affairs, in this case, they have created magnificent stripes of color along the mountainsides of Zhangye Danxia. And while I wouldn’t assume you’ll see unicorns when you go, exploring mountains of red, green, and yellow is pretty wild.

When people think of California, they always tend to think of sunny beaches full of celebrities lined with palm trees. Listen, I get it, the sunny California beach lifestyle is amazing, but I promise you, if you’re willing to look outside that frame and up into the mountains of the Sierra Nevadas, you will find a whole new side of California you never imagined. One such place is Yosemite National Park. Lined on both sides by skyscrapers of granite rock, whispering waterfalls, and endless forest, Yosemite is a mecca for rock climbers, hikers, and campers. The North Face brand, which was started in San Francisco, has even based their logo on the famous shape of the Yosemite’s Half Dome. With hundreds of hikes and climbs to choose from, the park is not only accessible to all abilities, it’s also ridiculously photogenic. Check out #yosemite on Instagram for a taste of the beauty.

I’ll admit that I am a nature and hiking enthusiast, so I had to add yet another national park. But hey, it’s 2018, right? One of your New Year’s resolutions is almost certainly to get in better shape, so there, you can thank me later. Anywho, what you need to know is that in the Magallanes Region of Chilean Patagonia, you will find more sheep than people, emerald green valleys, vigorous rivers, glassy blue lakes, and a world of ice in the form of glaciers and icebergs – it’s gorgeous. It’s also harsh, unforgiving, and has been deemed one of the most inhospitable places on Earth. That’s why I recommend you schedule your visit for either January or February. Any other time of the year and the weather will probably be too cold, wet, windy, and generally miserable to make it any fun. But January-February… trust me, it’s worth it.

While many people consider Paris to be the “City of Love,” I prefer to think it’s Rome because Rome in Italian is Roma which backwards spells “Amor,” the Spanish word for love. That aside, can you get any more epic than being known as the Eternal City? It is not only one of the oldest occupied cities in Europe, but it is also widely regarded as the birthplace of Western Civilization. There is so much history here! The Pantheon, the Trevi Fountain (a personal favorite), the Spanish Steps, the Colosseum, and the Vatican! In just a few hours, you can see some of the most iconic architectural sites in the world and, after seeing the Vatican, even walk home with bragging rights for having visited the smallest country in the world. All this, and we haven’t even started talking about all the delicious gelato and carbs you’ll consume every step of the way.

Nothing ensures you’ll get a good night’s sleep like a pack of howler monkeys outside your window. Well, sleep isn’t why you came to Costa Rica in the first place, am I right? Starting with the world-class surf breaks in Tamarindo and heading up to zip line through the cloud forests of Arenal, then down to the dense jungles Corcovado National Park, the action never stops in CR. With amazing natural biodiversity, hiking, mountain biking, birding, surfing, and beaches, Costa Rica makes the top-10 list of places to visit in 2018 for many reasons, but more than anything it’s Costa Rica’s Pura Vida lifestyle. Known as the national motto, “Pura Vida,” which translates as pure life, is the heartbeat of the Costa Rican people. It is hello, goodbye, and a way of life that places value on the people and activities that are most important to you. With that in mind, it sounds like a couple of weeks on “Tico time” would do us all a lot of good this year.

As I write this, outside is a mixture of snow and rain and is most probably influencing my daydreaming of warm tropical places, but, to be real, Mauritius doesn’t get enough credit. Often overshadowed by the Seychelles and Maldives, I can’t really describe the beauty that is Mauritius. With gorgeous white sandy beaches, world-class surfing and scuba diving, and sunsets that will blow your mind, Mauritius is a truly magical place. There’s a reason African sunsets are famous after all. To the south, you’ll find great kite surfing and hiking. Mauritius was also heavily influenced by the British, so don’t get confused when you find yourself driving on the left. I bring this up because I would highly recommend renting a car to get off the coast and a bit inland where you can indulge in meals that are 25x cheaper and 10000x more authentic and delicious. What more could you ask for?

Cheers to a new year and happy travels!

Tags: Travel tips, New Year, Hawaii, New Years, Beach
Plan your 2018 adventureLet's go!
Get the latest on travel, languages and culture in the GO newsletterSign me up

Your quick guide to making the most out of Miami
By Chelsea · 4 min read
Young Adventures: 5 Tips for Young Travelers
By Karla Garcia · 3 min read
Why learn Russian
By Finola · 5 min read
Why a summer abroad is the best idea ever
By Emma · 3 min read
See more from