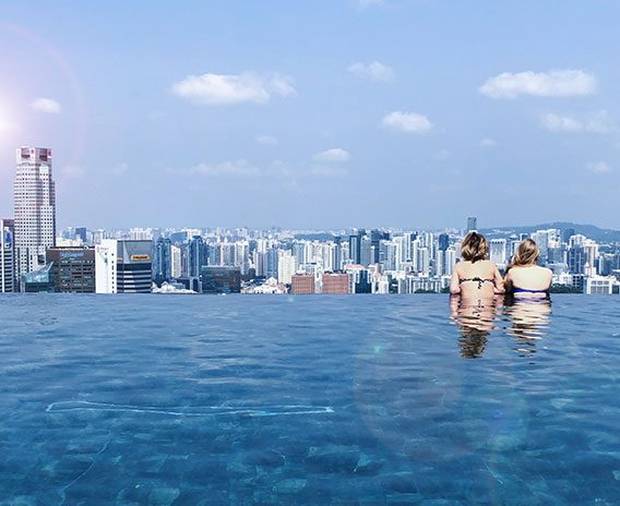 For many, Singapore evokes visions a busy skyline and spotless streets. Whilst those ring true, there’s a lot more to the Lion City than meets the eye. From sleek, trendy restaurants, scattered across the city, to a bustling, fresh fashion scene, the city known for its conservative rules will surprise you.

Here are our ten reasons to love Singapore – prepare yourself for the wave of wanderlust ahead.

A product of Chinese, Indian, Malaysian and Indonesian influences, it’s no wonder the cuisine in Singapore is famed for both its quality and diversity. The city is also home to the cheapest Michelin-Star restaurant in the world: Liao Fan Hong Kong Soya Sauce Chicken Rice & Noodle. Whilst the name may well be a mouthful, this humble street food restaurant dishes up very simple (yet delicious) meals. Singapore is also home to many food markets (called hawker centers), some of which are located underground, so doing a bit of digging (not literally) to find all the best gems is highly recommended!

As a former British colony, it’s unsurprising that one of the city’s most-spoken languages is English. Singapore draws people from all over the world, creating a wonderfully multicultural population. With many people’s common language being English, it’s a fantastic opportunity to improve your language skills and chat to people from all over the world.

For one of the most impressive views of Singapore, head to Marina Bay Sands. For those staying at the luxury hotel, there’s the undeniably breathtaking infinity pool on the roof of the impressive architectural structure that is the Marina Bay Sands hotel. But fear not – non-guests can purchase tickets for the SkyPark observation deck, located at the top of hotel. The deck boasts spectacular 360º views of the cityscape and is well worth the visit.

4. Gardens by the Bay

Singapore has been dubbed the Garden City for good reason – almost half the island is enveloped in green. From nature reserves to the Singapore botanic gardens, there’s no lack of greenery in this city. There are so many different things to see and do in Singapore, with the Gardens by the Bay standing out as a must-visit. Home to more than 1 million plants, the gardens present a vast expanse of green to awestruck visitors. From the tranquil waterfall in the Cloud Forest to the light-harnessing Supertrees, the Gardens by the Bay are an unmissable experience.

The culture in Singapore is made up of its various ethnic influences. People from many different countries, practicing various religions, live harmoniously alongside one another. Something that is consistent across the whole city is cleanliness and respect. The rigid rules and heavy sanctions on things like chewing gum and littering – whilst requiring a bit of adjustment – are the reason why Singapore is one of the cleanest cities in the world.

Leading on from the previous point, Singapore’s cleanliness is not to be overlooked. If your previous vision of the hustle and bustle of a big city involved what felt like wading through rubbish, then Singapore will be a very pleasant surprise. The streets and public transport systems are spick and span, which means you won’t feel the need to practically bathe in antibacterial gel post-travel.

There are a total of seven beaches in Singapore. From Palawan Beach, with its mysterious-looking suspended bridge, to the picturesque beach on Lazarus Island, located off the coast of Singapore, you’re spoiled for choice in this stunning city. Soak up the sun, take in the views or just play a game of volleyball on the beach – either way, you’re in for a treat.

Whilst Singapore may not be the first city that springs to mind when it comes to the topic of fashion, it certainly has a lot to offer. Many young designers have installed themselves and their designs in former chophouses located along Haji Lane. A fairly stark contrast to the larger shopping malls, Singapore’s “original hipster neighborhood” offers up vintage threads, fun prints, and quirky designs. The street also happens to be highly Instagrammable, so have your phone at the ready.

Aside from being a stunning piece of architecture, Singapore’s ArtScience Museum opens the door to a fascinating fusion of art and technology. The Future World exhibition is particularly interesting. The immersive space takes museum-goers on a journey through four key narratives: Nature, Town, Park, and Space. Together these elements mesmerize with stunning lights and interactive artworks, providing an unforgettable experience.

If you crave sunny summer temperatures year-round, then you’ll probably be on board with the fact that the average temperature in the Lion City is 32ºC. You can forget wooly turtlenecks and jackets reminiscent of duvets, and fully embrace the prospect of a perma-tan with Singapore’s non-stop T-Shirt temperatures.

Tags: City life, Singapore, Beach
Get the latest on travel, languages and culture in the GO newsletterSign me up