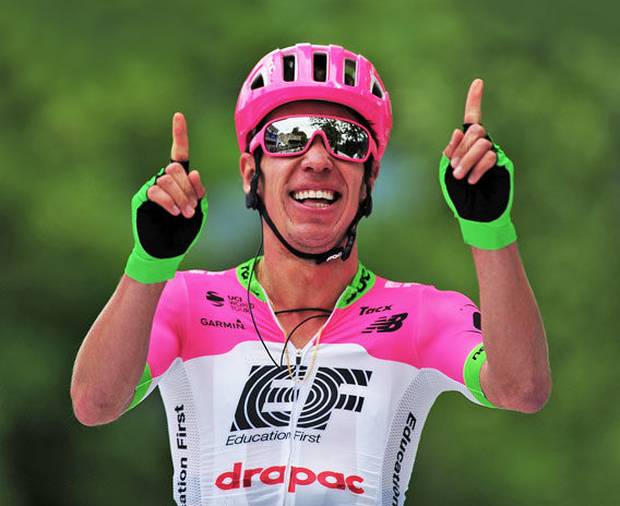 After losing his father at the age of 14, Rigo was forced to split time between school, selling lottery tickets on the street and competing in cycling events. Despite a grueling schedule, Rigo stayed calm and focused as he rose up through the local and national levels. But, by the time Rigo was 16, he and his family had reached a financial crossroad: he needed to either turn pro immediately or sell lottery tickets full-time.

Since the age required to turn professional was 18, the outcome of Rigo’s request was not clear. In the end, Rigo’s mother was permitted to sign and was technically awarded the contract and license, allowing him to turn pro early.

Three years later, Rigo’s hard work and positive outlook paid off when he got his big chance to race for Tenax in Europe. He moved to Italy, where he lived with an Italian family, learned Italian and began competing in European races.

While Italian remains very important to Rigo both professionally and personally, he is learning English to improve his communication with his teammates and fans around the world.

Now, with nearly 15 years of international cycling experience and three languages in his repertoire, we caught up with Rigo to ask for a few tips on living abroad and learning languages.

Q: What do you believe is most important when you travel to another country?

A: For me, languages are super important for communication. When someone is in a country and can’t speak the language, it’s like being without your passport or clothes. These days, communication can be very confusing, and when my English wasn’t as good, I used to arrive in foreign airports and be totally lost.

Q: How do you communicate with your fans when you travel?

A: With the fans, I speak a language that is the language of love and passion. When I have a race and I see the fans, I’m sharing a moment or a photo, not necessarily a “language” in the traditional sense.

But, apart from that, being able to communicate in multiple languages, especially in English, is certainly important for traveling and talking with fans.

Q: Those differences in culture and language aren’t only present when you travel but also in your own team. How do you communicate with your EF Education First-Drapac p/b Cannondale teammates?

A: It’s no problem. Honestly, I think it’s better because even though we represent 13 different nationalities, the most important communication is about the races and strategy – and we do all that in English. Everybody has a good enough level of English to communicate as a team.

Q: Do you think it’s easier to learn a language when you’re abroad?

A: Yes, I think it’s much easier because you’re not just going to be in a class for two or three hours. When you are in the country where the language is spoken, in reality, you are in a 24-hour class, listening to it and being forced to use it.

Q: What phrases have your teammates taught you?

A: When I’m getting close to winning a stage or a race, they’ll yell out “almost!” And when I’m really close, they’ll say, “Rigo, almost done!!!” It’s simple, but this is how we learn every day.

Q: And, from the other perspective, what Spanish or Colombian expressions have you taught your teammates?

A: I’ve taught them all kinds of things, but the phrase they like the best is “tranquilo papito,” which translates as “take it easy.” Cycling is an intense sport, and it’s good to encourage each other to just chill and be calm.

Tags: Sports, EF Talks
Learn a language with EFLet's go!
Get the latest on travel, languages and culture in the GO newsletterSign me up