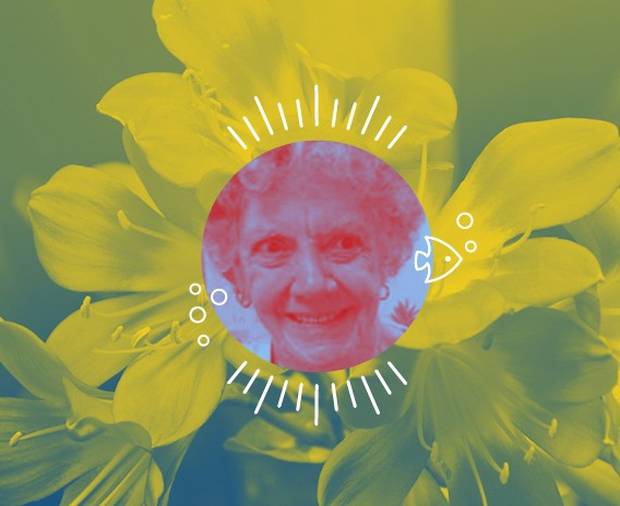 You’re never too old to travel and explore new countries. It sounds like a motivational poster at your doctor’s office, but we have proof: Meet Ruth from Lugano, a city in the Italian part of Switzerland, who gave herself the gift of travel for her 80th birthday and went on a study abroad trip to Hawaii. For three months, she studied English, explored the locations of the TV series Hawaii Five-0, (the original version from the 60s, not the new one with the guy from Lost and that other guy from Ocean’s Eleven), and experienced all kinds of Hawaiian adventures. Ruth is now 81 years old, and she’s already planning her next study abroad trip. To Hawaii, where else?

We talked to Ruth about her relationship with Hawaii, and why she wanted to go on a study abroad trip to the other side of the world instead of a senior cruise in the Mediterranean.

1. Why have you decided to go on a study abroad trip to Hawaii?

I’ve watched a lot of movies about Hawaii, and I have been fascinated by the island for a long time. That’s why I decided that it’s time to explore Hawaii myself. Plus, I wanted to improve my English, even though I can speak pretty well already.

2. How did your friends and family react to your decision?

My family was very excited! The study abroad trip was my birthday gift, and my whole family and all of my friends supported and encouraged me.

3. Did you have any concerns about the trip?

No, there were no concerns, and I wasn’t worried about anything.

4. How was it to live with your host family?

I lived with an older couple, and they were very nice and helpful. It was a big house, and I wasn’t their only guest – the couple’s daughter and five other study abroad students lived in the same house as well. The host mom, who was in her late 70s, asked me one day if I’m Catholic – I said yes, so we often went to church together on Sundays. To feel at home, I started baking my own bread, and I bought butter, cream cheese, Nutella, and peanut butter for breakfast – my host family didn’t mind.

5. How was it, after all those years, to go back to school and do homework?

I’ve been studying English in Lugano for a while, so I was used to going to school, and it wasn’t that difficult to adjust. Because I’ve been taking language classes for years, I was pretty good at speaking and comprehending English.

The ocean and the sun – I really miss them in Switzerland. I also liked the restaurants: There was a Chinese restaurant where customers could watch noodles being made from scratch. It was very interesting, and a bowl of noodle soup only cost $3.50. 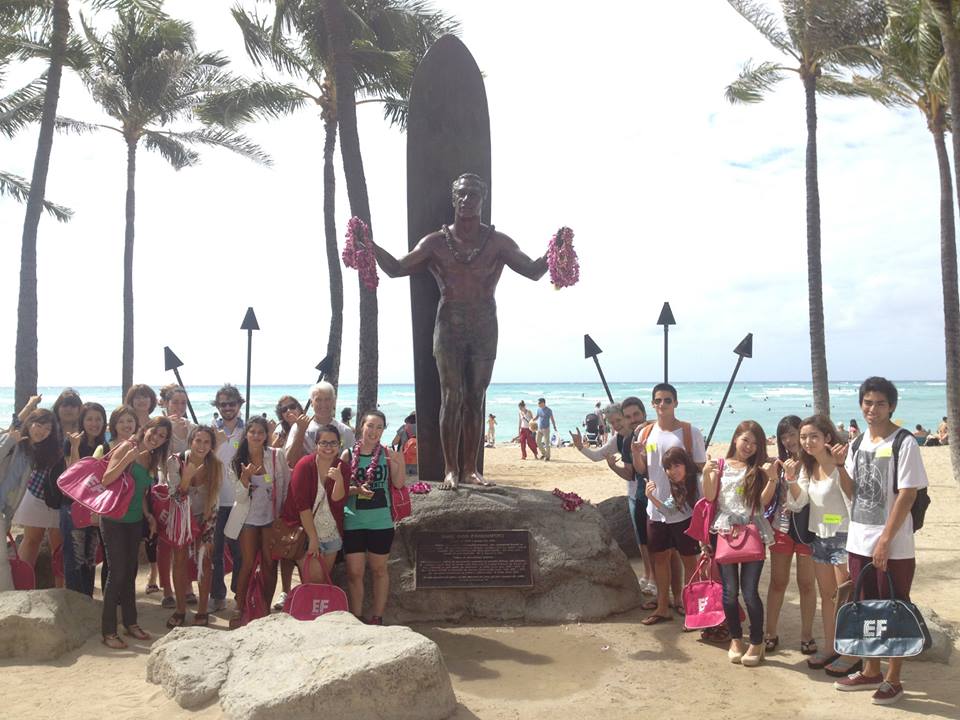 Ruth and her classmates hanging loose in Hawaii. (She the first to the right of the statue.)

7. What was the biggest challenge during the trip?

The transfers were pretty exhausting: My son drove me to Milan where I took a flight to London, then to Los Angeles and from there, to Hawaii. Every time I had to switch planes, I had to unpack my laptop and go through security. The flight back was to Los Angeles again, then to New York and back to Milan. I think each way took about 22 hours.

I loved the scenery: The island was very green, and there were flowers everywhere. The beaches of Waikiki were very clean, probably also because smoking wasn’t allowed at the beach. A special experience was visiting the original police station of the original Hawaii Five-0 TV series. I often watched the show way back when, and I was amazed that there were skyscrapers with more than 25 floors in the Hawaii of the 1960s. At the police station, I took photos, and I talked to a police officer. He knew some of the original cast members, even though a lot of them have passed away in the meantime. The hotel from the series still looked exactly the same. I took a lot of trips, too: I went to Pearl Harbor, for example, and I often rode the bus. I also found a fabric store that had kilometers of fabric! I bought fabric for about $50 and made blouses, shirts, and all kinds of other things.

9. Now that you’re back home, do you often speak English in your daily life?

I don’t use it all that much, but when I meet people who only speak English, I can talk to them easily. I also speak French, Italian, and German. I often watch English movies that are neither dubbed nor have subtitles. I would like to read English books, but I just don’t have time: I sew a lot and have various other hobbies.

10. How was it to be with the other study abroad students?

Most of them were much younger, but I met a lot of great people. I’m still in touch with a gentleman from Solothurn, a city in the German part of Switzerland, and a woman from the Steiermark area in Austria.

11. What surprised you the most?

I was very surprised that Easter wasn’t celebrated as much as back home. I took chocolate from Switzerland with me so I could hand them out at school. The EF staff was super excited about the chocolate, but nobody celebrated Easter like we do in Switzerland.

12. I heard you’re planning another study abroad trip to Hawaii. When are you leaving?

Yes, I would like to go to Hawaii again – for a month, this time. The trip depends on my health, of course. I think this November of next February would be a possibility. I already told your colleague that I would like to have a single room.

Tags: Language learning, Student life, Abroad
Study abroad, just like Ruth!Learn more
Get the latest on travel, languages and culture in the GO newsletterSign me up