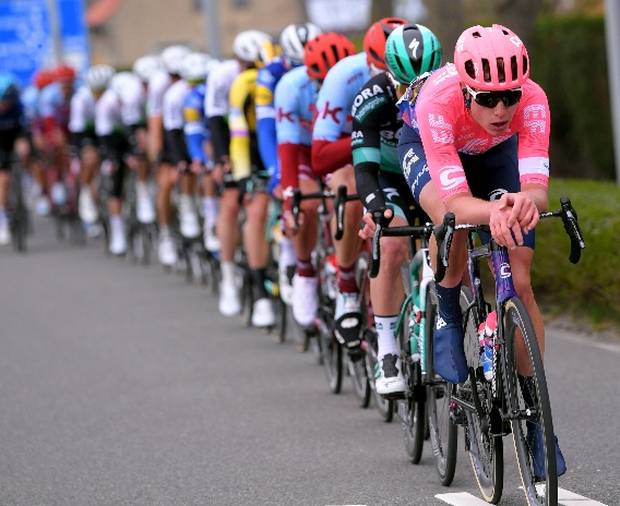 I love to ride bikes. I commute, mountain bike, join weekly group rides and even track my rides with an app to push myself to be faster. Most of my friends and family would describe me as an “avid cyclist,” but when it comes to understanding bike racing… that’s a different story.

Yellow jersey, polka-dot jersey, the chase, the peloton, a pace line – honestly, it’s enough to make my head spin. So, in preparation for this year’s Tour de France, I thought I’d take a moment to educated myself before the race.

These are the top terms you need to know to watch (and enjoy!) the Tour de France and understand what those guys in colorful spandex are doing out there.

Also known as the maillot jaune, the yellow jersey is worn by the rider who is the General Classification (GC) leader, riding the race in the least amount of time.

The green jersey, or maillot vert, is worn by the rider that has accrued the most points during the race. Points are awarded based on the positions that riders finish each stage as well as their performance during intermediate sprints within stages.

Polka-dot – King of the Mountains

Worn by the rider that has the had the best finishes and earned the most points in the mountain stages of the race. The more difficult the climb, the more points can be won.

A light rider who specializes in hilly or mountainous racing.

A powerful rider who can perform high-velocity burst finishes.

A strong endurance rider who excels at maintaining a high speed over a long period of time to win stage sprints or time trials.

An experienced rider in charge of executing the team strategy and ensuring each rider goes to the right place at the right time.

The rider who is favored by the team for either the day’s stage or the overall. This may be a climber on a mountain stage, a sprinter on the flats or the GC contender.

A teammate who helps the protected rider, whether by sheltering them from the wind, physically buffering them from other riders or bringing more water from the team car.

The main group of racers.

When riders arrange themselves in a single or double line to gain aerodynamic shelter from the rider in front of them. Riders will then rotate to the front of the line, breaking wind for their teammates.

When one or more riders escape from the peloton and rides ahead of the main bunch.

Riders or groups of riders who are trying to catch up with the break but are stuck between the break and the peloton.

The group of riders off the back of the peloton. During a mountain stage, this is usually the sprinters or heavier riders who can’t match the pace of the light climbers.

Tags: English, Sport
Explore FranceLet's go!
Get the latest on travel, languages and culture in the GO newsletterSign me up